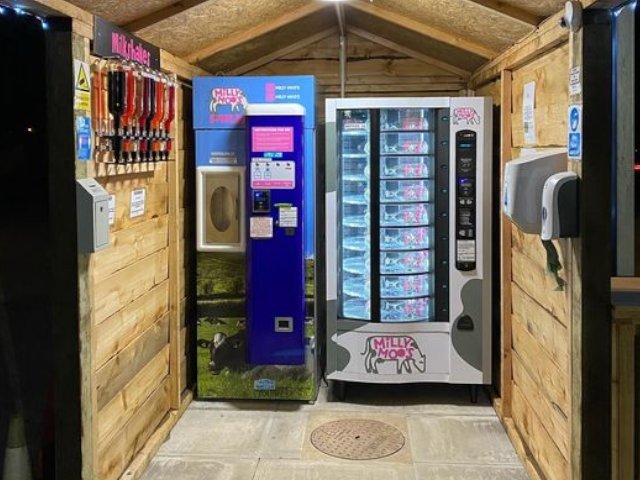 Milk vending machines are a fairly new innovation that lets dairy farmers sell fresh milk and other dairy products direct to their customers.

The increasing popularity of milk vending machines’ comes from our growing interest in sustainability and freshness, together with the need to support dairy farmers by ensuring they get a fair price for their products.

Farmers put automatic coin-operated milk vending machines in their farm shop or more often in a shed that is publically accessible when the shop is closed, sometimes the milk machine is available 24 hours a day 7 days a week.

Larger farms can set up a network of milk vending machines in convenient locations in the local area giving them a much bigger market for the output of their herd.

The milk machines provide customers with chilled, fresh, milk direct from the farm. Often the milk is non-homogenised,  organic, and sometimes even unpasturised (Raw).

Farms selling milk in this way tend to be family run with smaller herds. They are likely to be organic and their cows will often spend more time grazing outdoors on grass.

Pasture-fed milk has been shown to contain higher levels of beneficial essential farry acids, including CLA, an essential fat for brain development as well as helping with weight control.

Here’s how to use a milk vending machine

If you haven’t got your own bottle or container, you can usually buy an empty one on site.

Put your money in the milk machine, most only take coins with a litre of milk costing around £1.20.

Take the lid off your container, open the machine door and hold your bottle up to the nozzle at a slight angle to avoid frothing the milk.

Press the button and wait for the milk to pour.

Put your lid back on, and if it’s a milkshake, shake until the powder has dispersed.

Remember these important points about your farm fresh milk

You MUST sterilise your glass bottle before reusing it in the milk machine. Putting it in the dishwasher is ideal.

You need to refrigerate your milk at less than 4 degrees C as soon as you get home, and then keep it in the fridge. Raw milk kept in the fridge should last about 7 days, pasteurised will last more like 14 days or possibly longer. You can freeze the milk and it won’t affect the quality or taste but make sure to leave some room in the container for the frozen milk to expand.

Because the milk isn’t homogenised the cream will rise to the top if left overnight in a fridge. This cream is delicious in coffee or on cereal, or you can shake the bottle gently and mix the cream back into the milk.

What is raw Milk?

Some farms supply raw milk. This is milk that HAS NOT been treated with heat to sterilize it (pasteurisation) it also hasn’t had the fat droplets emulsified to stop the cream from separating (homogenisation). Over recent years it has become very popular as people turn away from highly processed foods.

Raw milk is how all milk used to be, before pasteurisation became standard practice. Although there are many documented health benefits to the consumption of raw milk, there are also some risks and it’s really important that you research the risks of using raw milk and decide for yourself if it’s something you want to use. By law, suppliers of raw milk MUST include a health warning on their raw milk products.

What are the benefits of raw milk?

Raw milk has superior nutrition and significant health benefits over pasteurised milk because it contains greater bioavailable nutrients, as well as a wide array of beneficial enzymes and probiotics which are known to have benefits on the immune system and gastrointestinal tract.

Drinking raw milk may increase your resistance to allergies, asthma, respiratory infections, otitis, and eczema, though these benefits are not strongly proven.

What are the risks of drinking raw milk?

Commodity raw milk and dedicated raw drinking milk are very different. Factory farmed Commodity raw milk that is going to be industrially pasturised may not be produced to the same safety standard and may contain dangerous pathogens.
Raw milk that is carefully produced for direct human consumption without pasturisation is subjected to rigorous testing and standards. Evidence has shown that this type of raw milk is a low-risk food.

What is Homogenised milk?

Homogenisation is a process where the milk is forced through a tiny nozzle under huge pressure. It breaks the cream molecules down into microscopic particles which means the cream won’t separate out when stored, something that is very important to the supermarkets.

The downside of the Homogenisation process is that the newly microscopic fat particles (cream) can now directly enter your bloodstream which isn’t ideal. The process also destroys many of the natural nutrients in the milk.

Pasturised milk is milk that has been heated to a very high temperature to kill off any bacteria. This means you can store it for up to two weeks in the fridge, whereas unpasturised (raw) milk should be consumed within 7 days and ideally the same or next day.

There don’t really seem to be many downsides to pasteurising milk other than it adds another “Industrial” step to the milks production process.

Farms that provide pasturised milk usually carry out the pasturising process on site for a total of 4 Steps!

In comparison the industrial process that provided comprises a total of 10 stages including a LOT of travelling in large diesel lorries. By the time you buy your supermarket milk it’s already at least a week old.

The benefits of buying Farm fresh milk are clear, it’s fresher, better for the health of you, your family, the cows and the planet. No wonder it’s one of the fastest growing trends in fresh food shopping.